Zemmour Makes Case for Right Coalition Ahead of Parliament Elections 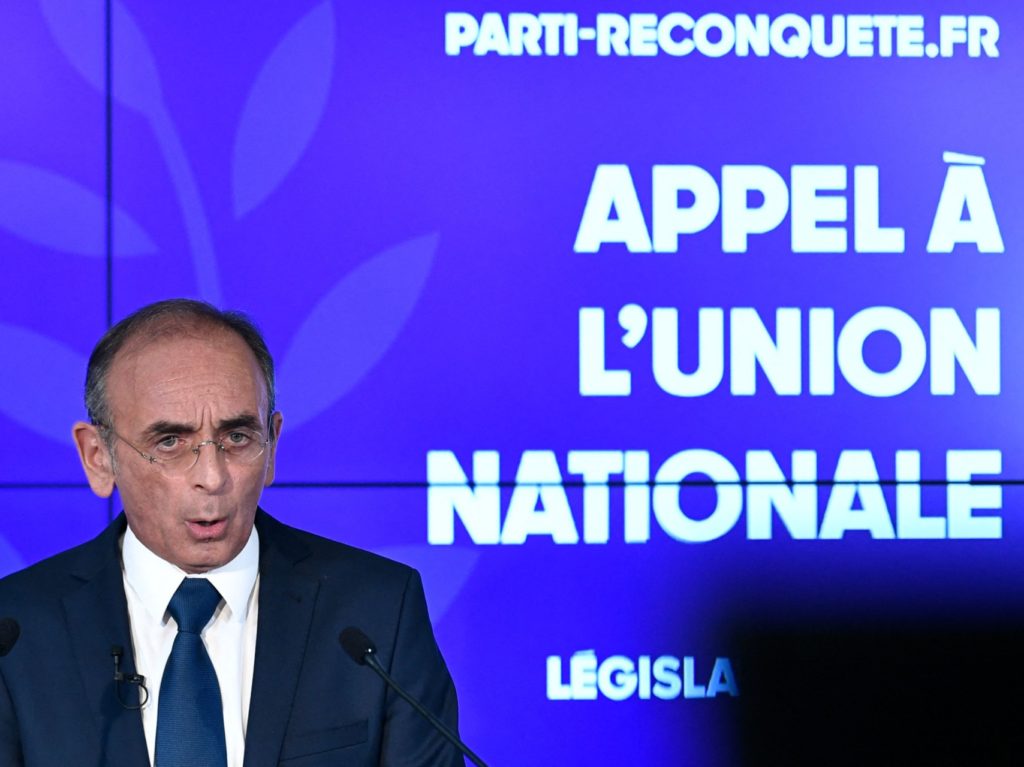 Following the defeat of Marine Le Pen in Sunday’s presidential election, conservative Eric Zemmour has reached out to the National Rally leader to form a right-wing coalition ahead of June’s parliament elections.

On Monday Mr Zemmour, who leads the Reconquest party and won seven per cent of the vote in the first round of the French presidential election, called for unity with Ms Le Pen on the social media platform Twitter.

“Marine Le Pen, by accepting the hand that I extend to you, you have the opportunity to put an end to the cordon sanitaire which has sterilized the chances of the national camp for 40 years. Take it, not for us, for France. Let’s do it. [Together],” Zemmour wrote.

In another message, Zemmour claimed that a united right-wing coalition could receive as many as 12.54 million votes, which would put the bloc ahead of President Emmanuel Macron’s La Republique en Marche! (LREM) as well as the La France Insoumise, led by far-left politician Jean-Luc Melenchon.

The tweet also claimed that if Ms Le Pen and the National Rally (RN) were to go into the June election alone they were likely to score just 8.13 million votes, far behind their rivals.

A poll released Monday by Harris interactive, meanwhile, has claimed that President Macron will likely secure another majority in the parliament, winning between 326 and 368 seats in the 577-seat chamber.

According to the results of the poll, Le Pen’s RN could win as many as  75 to 105 seats, making the party the second largest in the French National Assembly, a massive increase from the number of seats the party won in 2017, which stood at just eight.

Harris Interactive also revealed that a united right-wing coalition between the RN, Zemmour’s Reconquest and the Debout La France (DLF) led by Gaullist Nicholas Dupont-Aignan, could score even more seats at between 117 to 147, though a similar centrist coalition led by Macron would still win a majority.

Days prior to the second round of the presidential election, several vice presidents of Zemmour’s Reconquest, including Le Pen’s niece Marion Marechal, called for a united coalition of the right ahead of the legislative election.

“This choice does not call into question the singularity of our line and our strategy, which cannot be found anywhere else in the political spectrum,” Marechal said in a joint statement with MEP Nicholas Bay and MP Guillaume Peltier.

According to the statement, such a coalition would call for a “legislative agenda a policy of firm migration, a hardening of penal policy, a real economic patriotism, (…) support for families and the birth rate (…) or the rejection of any further surrender of sovereignty to the European Union.”

So far, Marine Le Pen and her party have been reluctant to consider an alliance with Zemmour or any other parties, with MEP Jordan Bardella, the acting president of the RN, rejecting calls for a coalition.

Louis Aliot, mayor of Perpignan and a major figure in the RN, added that Zemmour must “deflate his head which is huge,” and added, “You can’t say he shone. He had to come out on top and win the system: he made 7%. He should be more humble!”