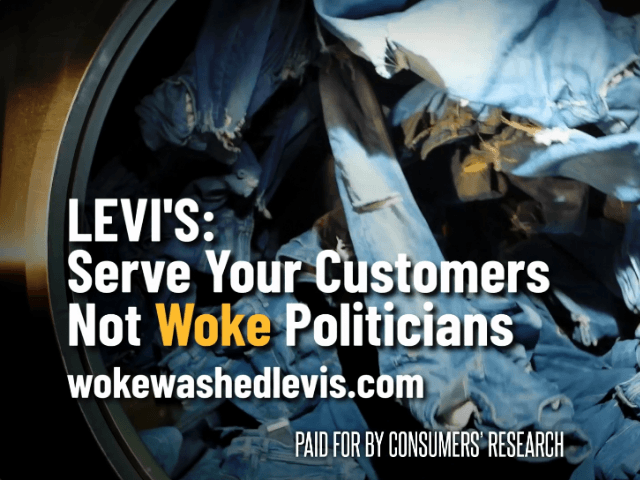 The following article is sponsored by Consumers Research.

Levi Strauss & Co. president and CEO Chip Bergh has made advocating progressive politics a corporate priority, stating that business leaders “have a responsibility” to create change. But weaponizing Levi’s for political purposes has come at the expense of those employees who hold opinions different from his own, reports have revealed.

Many of the progressive policies championed by the company, once an iconic brand of rugged individualism, are out of step with many of its consumers. Bergh, for example, working with the liberal group Everytown for Gun Safety, led the charge for stricter gun control in the United States.

Levi’s signed a “We Stand For Democracy” advertisement that ran in the New York Times attacking popular election integrity measures, while Bergh called election integrity laws such as Georgia’s “racist” and “a step backwards.” Bergh also stated that Levi’s would work with legislatures to “make sure that these restrictive laws don’t go into place.”

Even as Levi’s, under Bergh’s leadership, pushed “woke” politics, the company opened itself up to charges of hypocrisy by engaging in business around the world that were anything but woke. Rather than stand up to China’s repressive Chinese regime, Bergh doubled down, calling China one of his top priorities. Levi’s pulled manufacturing from China in the 1990s only to return for the low-wage labor.

The denim manufacturer has also engaged in questionable corporate behavior closer to home. During the heart of the pandemic, Levi’s paid millions in dividends to wealthy shareholders while furloughing thousands of its workers. When Jennifer Sey, a top female executive at the company, spoke publicly against school closures during the pandemic, Levi’s allegedly tried to silence her. Sey says she was bullied out of her job by “the intolerant woke mob” after more than two decades at the company. Bergh remarked that Sey was “acting like Donald Trump” for opposing school closures. Sey declined Levi’s offer of a $1 million severance package that would have required her to sign a non-disclosure agreement that prevented her from speaking out.