US cities want to return to pre-pandemic life. One obstacle: transit crime.

For months, Anna Balla, 47, tolerated the unruly behavior she says has become commonplace when riding the “L” downtown: smoking, harassment and even a stranger’s uninvited use of her shoulder to vault himself into a spot in a crowded Chicago train.

But it was a ride in March that made her swear off the trains completely. At a busy stop in the heart of the Loop during rush hour, she saw a young shirtless man yanking a woman and hitting her with an empty beer bottle as she cowered and screamed on the platform. Balla bolted from the packed car and fled to the street.

“I was just worried that someone was going to pull out a gun, or if the cops arrived, it would become a shootout,” said Balla, a museum registrar in Chicago. “It had that feel to it.” Police officers at the scene of a shooting that injured about two dozen people on a subway train in Brooklyn, April 12, 2022. (Hilary Swift/The New York Times)

Just as a number of major cities are trying to lure people back to formerly bustling downtowns, leaders are confronting transit crime rates that have risen over pre-pandemic levels in New York City, the San Francisco Bay Area, Philadelphia and Los Angeles. This month, a shooting on a subway train in Brooklyn injured 23 people. In other cities, stories of violent assaults, muggings and stabbings on buses and trains dominate the evening news and worried conversations in neighborhood apps.

Low ridership has left many passengers saying they feel more vulnerable than before. In Philadelphia, the number of certain serious crimes reported on public transit is higher than before the pandemic, and in New York about equal to previous levels, even though ridership in both places is significantly lower. In other cities, there are fewer crimes being reported than in 2019, but the crime rate is up because there are so few passengers.

The crisis on public transit systems threatens the nation’s recovery from the coronavirus pandemic: Restoring confidence in subways, commuter rail and buses, officials say, could help rescue local economies from two years of the doldrums, encourage more workers to return to urban offices and make tourists comfortable moving about cities freely. In densely populated places like Chicago and New York, where public transit is essential for millions of people, the well-being of the system can feel like a proxy for the city itself.

Mayors, transit agencies and police departments are wrestling with ways to reduce crime and restore the confidence of commuters, but the fates of public transit and downtowns, experts say, can be intertwined in complicated ways: If more people return to public transit as they go back to offices and shops, trains can feel safer; yet if transit systems feel unsafe, people are reluctant to go back to the downtowns that hollowed out amid Covid. In Chicago, where the nation’s second-largest public transportation system served an average of 800,000 riders on weekdays in March, crime on the city’s trains and buses has spiked this year — and even before the pandemic, serious crime was rising on public transit. Last month, Mayor Lori Lightfoot announced heightened security and additional police officers to address fears from riders.

“It’s one of the most important things we can do to actually change the perception of the city overall,” Kevin Ryan, vice president of security for the Chicago Transit Authority, said of safety on the public transit system. “It’s the first thing a lot of people who are coming into the city see. It’s the lifeblood of a lot of the underserved or poorer communities that don’t have private vehicles who rely on this. It’s key that the CTA is a safe system.”

The number of crimes reported on public transit in Chicago is about half what it was pre-pandemic, he said, but ridership has also fallen by about half. The drop in riders on many public transit systems is essential to the rates of crime on those systems: In Los Angeles, the raw number of crimes recorded in 2021 was lower than in the years before the pandemic, according to data provided by the Los Angeles County Metropolitan Transportation Authority, but because the number of riders plunged, the rate of crimes per ride was higher.

In other cities, like Philadelphia, actual incidents of certain crimes on public transit have been mounting throughout the pandemic. In 2021, SEPTA police recorded 86 aggravated assaults, up from 46 in 2019. Robberies increased to 217 from 118 during that period. Crime numbers from the first months of 2022 indicate a slight decline in incidents of aggravated assault.

The challenges are not limited to transportation, said Jamie Gauthier, a City Council member in Philadelphia, but part of a broader trend of rising crime and violence across the city.

“We have an opioid epidemic and we have a housing crisis,” Gauthier said, “so the things that we’ve been seeing in the city, writ large, have also migrated into our public transit system.”

Part of the rising worry about crime, experts said, may reflect changing perceptions by commuters, many of whom at least paused their usual trips on buses and trains during the pandemic. The prospect of going back to public transit has left some people assessing safety in ways they might not ever have considered when daily commutes were a given. Adding to the tension for some passengers was the rollback of mask rules on public transit in many cities after a judge in Florida struck down federal mask mandates on airplanes and public transportation. 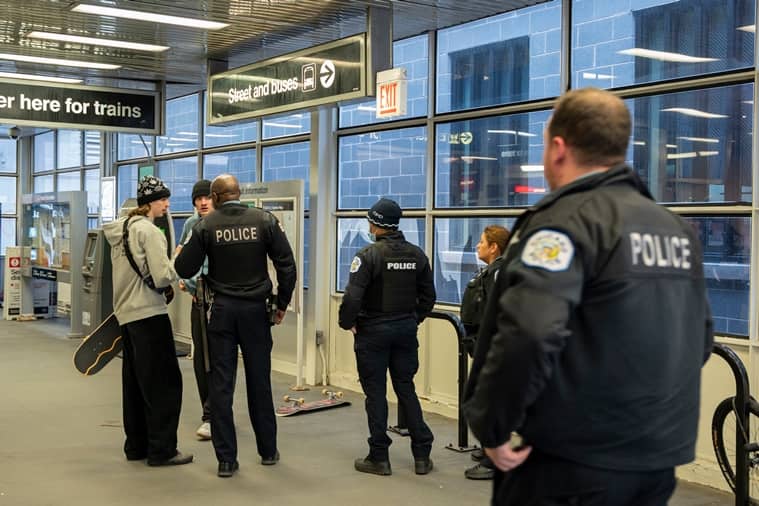 Christopher B. Leinberger, an emeritus professor of business at George Washington University who studies urban spaces and transit, said the most effective way to reduce violence on public transit systems was to get more people back to riding them. “Having lots of folks from all different incomes riding mass transit is the best way to suppress crime,” he said. “Obviously the police have a major role to play, but it really comes down to having people, lots of eyes, on different people.”

Long before the pandemic, several public transit systems were already challenged by funding problems, high maintenance costs and stagnant ridership. Then came the virus, which set off a sudden drop in passengers amid lockdowns and closures, starved transit agencies of revenue and raised questions about the fate of some systems. Now the shaky returns, spurred in part by hybrid office work, and the rising crime rates in some systems are extending that uncertainty.

In Los Angeles, the crime rate on the county’s metro system has increased over the course of the pandemic, adding fuel to long-burning debates on policing, homelessness and mental health.

“Most of our issues on Metro are dealing with people who are unsheltered,” said Hilda Solis, a Los Angeles County supervisor who is also chair of the Metro board. “So it’s more of a housing problem than a law enforcement problem.”

Darrell Owens, an East Bay Transit Riders Union member and transit advocate in the Bay Area, said public transit was sometimes the only place Americans encounter strangers, meaning that fears about safety there are often disproportionate to the perils of driving, which is often the most dangerous regular activity for Americans.

“The public is suffering in American cities,” he said. “That’s why American transit is so fraught: It’s one of the only times secluded people see other members of the public.”

In Washington, the crime rate on the Metro has dropped this year from earlier in the pandemic but remains higher than before the pandemic. The number of mental health-related calls has increased especially drastically.

On metro Atlanta’s transit system, MARTA, officials have sought new ways to handle people who took refuge on public transit during the pandemic. In August 2020, the system started a program in which officials said uniformed, unarmed security staff would help homeless people by directing them to shelters, counseling and treatment when necessary.

“I think you’ll see more and more of that throughout the transit world,” said M. Scott Kreher, MARTA’s police chief.

On the front lines of the nation’s public transit challenges are workers. They had already faced higher risk from the virus because their jobs kept them in public, and some systems have reported struggles to rebuild their workforces. Public transit workers say that harassment — physical assault, threats and objects thrown at them — remains prevalent despite drops in ridership.

“Things have gotten worse — you’ve got to get back to some stability and you’ve got to make it safer for people,” said Eric Dixon, president of the union that represents train employees in Chicago, who has called for a more robust police presence, and additional conductors on trains, to combat crime.

Kimberly Benedetto has experienced her fair share of harassment over her 23 years driving buses for Philadelphia’s system — passengers yelling at her and even spitting in her direction. But none of that compares with what she has seen over the last couple of years.

“I feel like things have gotten out of control,” said Benedetto, who said she experienced one particularly frightening incident in September by a teenager who threatened to assault her over a request to wear a mask, a requirement at the time.

“I will not stay one day past 30 years,” said Benedetto, referring to the tenure she needs to receive her full pension. “I’ll drive school buses — I just want to get away from this.”

This article originally appeared in The New York Times.