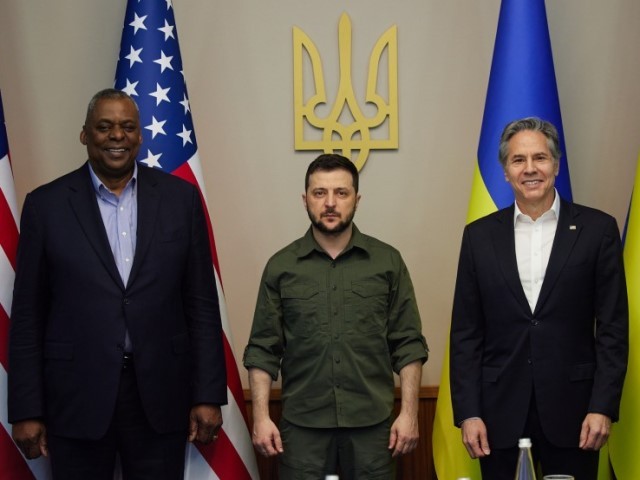 United States Secretaries of State and Defense visited Kyiv, Ukraine, in a surprise trip on Sunday and announced $713 million in military aid for Ukraine and partner nations assisting Ukraine in its fight against Russia.

Of the $713 million, $322 million is earmarked for Ukraine, and the rest will be split among NATO members and other nations supplying Ukraine with weapons, according to the Associated Press.

The aid will be in the form of foreign military financing, or cash that can be used to buy U.S. weapons. Recent tranches of U.S. military aid consisted of physical weapons transfers to Ukrainian forces from its own or other nations’ stocks.

During the trip, which was the first high-level trip of American officials to Ukraine since the war began, Secretary of State Antony Blinken and Secretary of Defense Lloyd Austin met with Ukrainian President Volodymyr Zelensky and other top officials.

Austin told reporters after their visit that the U.S. believes Ukraine can “win if they have the right equipment, the right support.”

“In terms of our — their ability to win, the first step in winning is believing that you can win. And so they believe that we can win; we believe that they — we can win — they can win if they have the right equipment, the right support. And we’re going to do everything we can — continue to do everything we can to ensure that that gets there,” he said.

Asked by a reporter how the Department of Defense was tracking the Stinger missiles and Javelin anti-tank missiles it was supplying to Ukrainian forces in light of “more and more imagery of those weapons falling into the hands of Russian-backed forces in the Donbas” area, Austin said it was “difficult.”

“In terms of our ability to track the weapons that are going in, as you know, we don’t have any forces on the ground, so that’s — it’s difficult for us to do,” he said.

“We did have a very good discussion with both the [Ukrainian chief of defense] and the president and minister of defense on the necessity to make sure that those weapons are tracked and, as best possible, to make sure that they’re protected from falling into the hands of adversaries,” he said.

“Now, when you’re in a fight, as you know, if a specific battle is lost, then you have less control over that — over your ability to control items. But they are focused on this issue and they know we are concerned about it, and we’ll continue to engage,” he added.