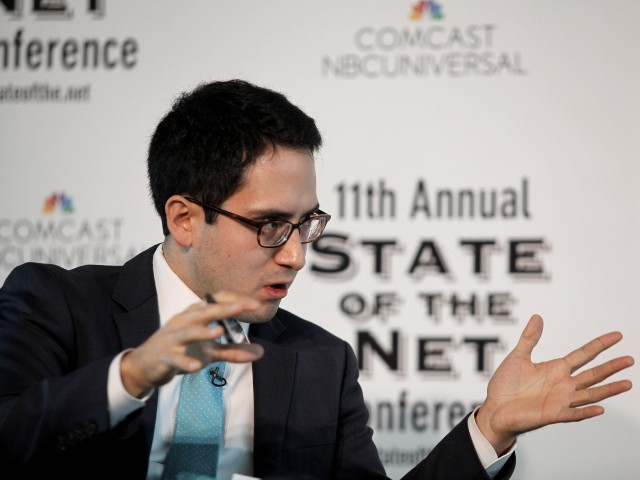 Bedoya will likely vote this week on Bedoya to become a commissioner at the FTC.

He said, “And with that—the new Democratic majority on the FTC will allow it to investigate and hone in on price gouging by Big Oil amid their stock buybacks and surging profits.”

This week, I intend for the Senate to fill the open vacancy on the FTC with Alvaro Bedoya.

And with that—the new Democratic majority on the FTC will allow it to investigate and hone in on price gouging by Big Oil amid their stock buybacks and surging profits. pic.twitter.com/LmgjB2dgJm

The FTC nominee holds many views that remain controversial.

“Alvaro Bedoya is a radical anti-law enforcement activist that supports defunding the police to fight racism and climate change and has advocated taking away tools that border patrol utilizes to keep Americans safe,” the senior Republican aide said. “Bedoya also supports increasing taxes on hard-working families to fund a left-wing climate agenda. He is a pawn for the Biden administration and the Squad.”

From December 2016 to December 2020, Bedoya served on the board of directors for the far-left Free Press organization, which has the backing of pro-censorship leftist billionaire Pierre Omidyar.

Free Press denounced Blackburn as a “swamp dweller” in 2017, adding that the Tennessee conservative mouthed the “most uninformed talking points.”

Free Press even accused Breitbart News of spreading “misinformation” and painting “people of color, immigrants, and religious minorities” as the “energy of the United States.”

In one tweet in February 2021, Bedoya wrote, “It is time to call ICE what it is: an out-of-control domestic surveillance agency that peers into all of our lives.’”

In a confirmation hearing, Bedoya claimed that he knew little about critical race theory (CRT), despite sitting on the board of an organization that actively promotes CRT.

Bedoya told Sen. Mike Lee (R-UT) the FTC should “police big tech,” saying it needs “every tool at its disposal”

Sen. Ted Cruz (R-TX) has blasted Bedoya as a “left-wing activist” and a “provocateur.”

A coalition of conservative organizations wrote to Senate Commerce Committee lawmakers in March, urging them against confirming Bedoya:

The confirmation of an ideological, progressive ally would give Chair Lina Khan an even freer hand in transforming the FTC, doing away with its rules, hamstringing businesses with red tape, and dismantling our market-driven economy. Khan has come under criticism for pursuing a hyper-regulatory, anti-business agenda, dispensing with the FTC’s precedents and rules along the way.

Bedoya has a history of personally attacking and supporting attacks on those he disagrees with. He has amplified Twitter posts calling Governors Abbott and DeSantis “death-eaters”6 and urging Republican Senators to resign.7 Additionally, Bedoya has shared numerous social media posts calling President Trump and individuals in the Trump administration “racist and white
supremacist.” He even liked a tweet disparaging Baron Trump. This type of aggressive rhetoric and behavior is inconsistent with the type of temperament required for a commissioner of the FTC.

“Bedoya’s confirmation would jeopardize investment and innovation, threaten the already weakening economy, and bring never before seen partisanship to the FTC,” the conservative groups concluded in their letter. “For these and other reasons, we urge Senators to reject Bedoya’s confirmation.