Rick Monday Saved the American Flag from Being Burned 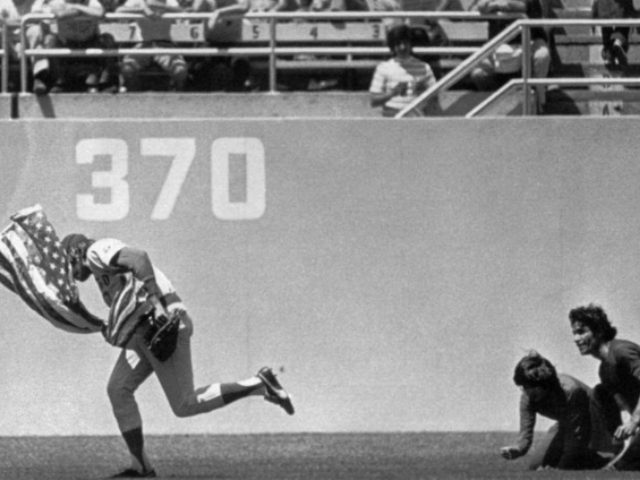 Monday marks the 46th anniversary of the “greatest play in baseball” by Chicago Cubs centerfielder Rick Monday who’s quick thinking stopped a protester from burning an American flag on the field.

As the Cubs faced the Los Angeles Dodgers at Dodger Stadium on April 25, 1976, a pair of protesters ran out onto the field in the bottom of the fourth inning with an American flag doused in lighter fluid.

The pair tried to light the flag on fire using matches they brought for the purpose, but Marine Corps veteran and Cubs centerfielder Rick Monday wasn’t having any of that.

Monday bolted across the field and yanked the flag right out from under the anti-American protesters.

The crowd leapt to its feet in applause and the scoreboard broke out in a message reading “Rick Monday… you made a great play.”

On the air during the broadcast, legendary Dodgers announcer Vin Scully famously said, “It looks like he’s gonna burn a flag!” And added, “Rick Monday runs and takes it away from him. … I think somebody was going to set fire to the American flag. Can you imagine that.”

“If you’re going to burn the flag, don’t do it around me,” Monday said immediately after the Dodgers 5–4 win. “I’ve been to too many veterans’ hospitals and seen too many broken bodies of guys who tried to protect it.”

“I don’t know what I was thinking,” added Monday, who spent six years as a Marine. “But I knew what they were doing was wrong.”

The protesters, a father and son pair who had trespassed onto the field, were arrested. William Errol Thomas was fined $60 and sentenced to a year probation, but his son wasn’t charged since he was an 11-year-old juvenile at the time.

“It angered me for a lot of reasons,” Monday told NBC Sports on a past anniversary of his iconic moment in history. “First of all, you’re interrupting the game. Secondly, now you’re bringing out a flag, and I was only about three or four years removed from being in the Marine Reserves.”

Years later, Monday was asked if he was annoyed by the fact that his entire 19-year MLB career is overshadowed by the flag incident. He replied, “if that’s all I’m known for that’s not a bad thing at all.”

Monday also said, “It’s a good thing I did get it because I did not want any of my former drill instructors from the Marine Corps to come and say, ‘Hey Marine! Why did you stand there and watch when they ignited the American flag?’”

Monday began his MLB career with the Athletics in 1966 before joining the Cubs in 1972. He ended his career playing on the field that witnessed his “greatest play,” when he signed on with the L.A. Dodgers from 1977 to 1984.