PHOTO– Citizens Rescue Deputy from Crash: ‘Angels Around Him’ 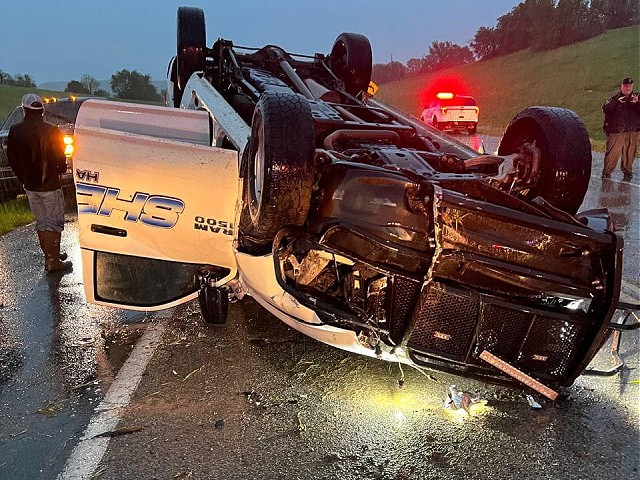 Citizens jumped into action when a deputy was in desperate need of help on Sunday, according to the Haskell County Sheriff’s Office in Oklahoma.

Although Boston was trapped inside his own unit, it was not long before he was extracted by multiple good Samaritans who knew they had to act fast to make sure he was okay, the sheriff’s office said in a social media post.

A photo showed his vehicle turned upside down on the wet pavement as another truck and police vehicle were parked nearby:

Following the incident, Boston was transported to a hospital where he received treatment. He appeared to have suffered minor injuries and would be back on the job in the near future, the sheriff’s office noted.

“Sheriff Tim Turner thanks all the citizens, our law enforcement family, and medical personnel who have assisted,” the post read, adding Turner urged those out in the weather to drive their vehicles with caution.

Social media users expressed relief the deputy was going to be alright and wished him well.

“We saw the lights. So glad he’s ok! Praying for a full recovery,” one person commented, while another wrote, “Sending prayers for complete and total healing! Looks like he definitely had Angels around him!”

According to Consumer Reports, any vehicle was prone to rollover but taller, more narrow vehicles such as SUVs were more susceptible than others due to their high center of gravity:

Sideways forces that develop when a vehicle rounds a curve shifts the center of gravity to one side, which can have a dramatic effect on the vehicle’s balance. The lateral forces increase with speed and also with rapid changes of direction–for example, when a driver makes too sharp a turn one way and then overcorrects the other way.

The transitions can create a pendulum effect resulting in one losing control.