The stadium in Montreal, built for the 1976 Summer Olympics, was once affectionately known as “The Big O”. Today in the Canadian metropolis people speak of the “Big Owe” – over 30 years, 264 million Canadian dollars have flowed into the complex construction and maintenance of the stadium with the extravagant roof structure. And the “large debts”, which Montreal only paid off 30 years after the Games, will continue to generate large costs. The third roof, which will soon be needed, is likely to swallow up hundreds of millions again, as it was called in the CBC documentary “The Big Woe” on the 45th anniversary of the stadium.

After the games, the stadium was used regularly by the Montreal-based baseball and football teams. But they have long since left the city and so the stadium now ekes out a large part of its existence as a so-called “white elephant”. Oversized, rarely used, expensive to maintain: Not only in Montreal does a stadium devour a lot of money without a real purpose. Such “white elephants” can be found in many of the host countries of the Olympic Games or soccer world championships. A particularly large number of them can be found in South Africa, the host of the 2010 World Cup. For the first World Cup on the African continent, elaborate stadiums were built in many places where there was absolutely no need. But the glamor of the World Cup should also be visible and palpable in the country’s provinces, for example in Polokwane or Mbombela, which was still called Nelspruit during the 2010 World Cup.

“White elephants” could one day also be in Qatar. The desert state will be the smallest country to host a World Cup in 2022 and has had new stadiums built for the mega event for years. Stadiums on whose construction sites workers – mainly from Nepal, Pakistan or Bangladesh – work under catastrophic conditions in terms of supply, safety and accommodation and which could possibly be unused after the World Cup.

But the Gulf state, which is heavily criticized because of the working conditions and the many deaths on the stadium construction sites, wants to show that there can be another way and is now presenting a stadium that can be completely dismantled after the tournament and made from recycled or again usable materials. The “Stadium 974”, named after the international telephone code of Qatar and the number of old shipping containers that supplied a large part of the material for the construction of the stadium, is to be dismantled after the World Cup in Qatar and rebuilt elsewhere. That is the idea of ​​Qatar, which advertises the stadium as “groundbreaking” in terms of sustainability for major events.

Stadium 974 will be one of eight stadiums in which the 64 World Cup matches will be played between November 21 and December 18, 2022. “If you look at the criticism of all the big stadiums that were built around the world and then not used, then this one is kind of useful,” Zeina Khalil Hajj told DW. But the climate activists with a focus on the Middle East also see the project as a “clever PR move” by the country with the highest CO2 emissions per capita in the world.

“That doesn’t mean they are the biggest polluter in the world. It just means that they have an obligation and an important role to play,” explains Hajj. “You have a responsibility as a rich nation. You have to do your part. And that means that you have to change your own consumer behavior. But what you are doing instead is this whole PR machinery.”

Bodour Al Meer contradicts this: “Qatar is a small, rapidly developing country, and hosting the World Cup has accelerated our national development plans,” said the head of sustainability for the Qatar Organizing Committee at a recent digital conference on regenerative sporting events. “Our vision for our country is the harmony between economic growth, social development and environmental protection.” The environmental part of FIFA’s sustainability strategy for the World Cup in Qatar is “perfectly aligned with Qatar’s national goals”.

In this context, the Gulf state and FIFA announced the first climate-neutral World Cup in history. The document on the sustainability strategy announces the reduction of emissions, energy-efficient stadiums and short transport routes. The latter result from the close proximity of the stadiums to the center of the capital Doha. The document also states that “the remaining unavoidable emissions should be offset”.

“Greenwashing” – compensate instead of avoiding it

“All praiseworthy goals,” says Phillip Sommer from Deutsche Umwelthilfe. But to compensate for “unavoidable emissions” by planting a million trees, as Qatar has promised, instead of using solar or wind energy to cool seven of the eight stadiums (the port stadium 974 is not cooled) and to supply them with electricity, is not what he would call “sustainable”. “It’s a kind of greenwashing just to compensate,” Sommer told DW. 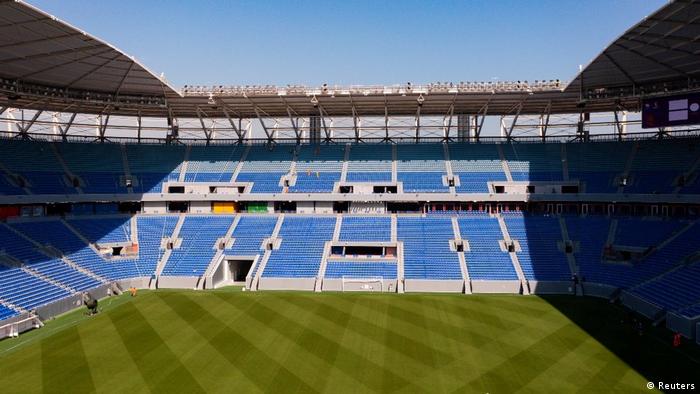 Because of the temperatures of up to 50 degrees in the stadiums, the World Cup was postponed from summer to winter 2022

Cooling the stadiums is energy-intensive, which is why the tournament has already been postponed by five months to avoid the scorching summer heat. However, Qatar is expected to continue using fossil fuel air conditioning in outdoor stadiums in November and December, as well as in shopping malls, markets and along busy sidewalks. “You should completely switch to renewable energies. All of the electricity and air conditioning should be powered by renewable energies,” said Sommer. “And if they build new energy systems for this, then of course they can also be used in the long term for the population there.”

“You can afford it”

From the perspective of German environmental aid, the host countries are not meeting the challenges in times of climate change by building expensive, new infrastructure for mega-events. Not even if one of the eight World Cup stadiums can be dismantled and rebuilt elsewhere. “I would first ask the question whether it is really necessary to build a stadium for just one purpose,” says Sommer. Building a new stadium just for this event and already planning that it will no longer be used because you no longer need it, that is “not a really sustainable thing”.

Environmental activist Zeina Khalil Hajj asks, with a view to a country that has got rich from the extraction of fossil fuels and is preparing to host a soccer World Cup with more than a million visitors: “Change the narrative in the country and really anchor one Sustainable lifestyle? “She gives the answer herself:” No, “says Hajj and sums it up:” Can you afford to do that? Yes. It’s a wasted opportunity. “

Translated from English by David Vorholt