Mumbai News: Amravati MP Navneet Rana and her husband MLA Ravi Rana approached the Bombay High Court Monday to file a petition against charges levied against them. The court will likely hear the matter at 2:30 pm on Monday. The Mumbai Police on Sunday slapped a sedition charge on Ravi Rana and Navneet Rana, and a  metropolitan magistrate court sent them to 14-day judicial custody. Their call for chanting Hanuman Chalisa outside Chief Minister Uddhav Thackeray’s private residence had triggered protests and chaos.

The duo were arrested for “creating enmity between different groups”. The Mumbai Police also shifted Independent MP Navneet Rana to the Byculla women’s jail in Mumbai, while Ravi Rana was taken to Taloja jail in neighbouring Navi Mumbai amid tight security, an official said on Monday.

In another sign of rising tensions between the BJP and Shiv Sena, Uddhav Thackeray on Sunday stayed away from the first Lata Dinanath Mangeshkar Award in Mumbai where Prime Minister Narendra Modi was honoured. Sources in the Sena said the party is upset with the Mangeshkar family for not putting the CM’s name on the invitation card for the event.

This is not the first time Thackeray has skipped a programme with PM Modi. On March 6, when the prime minister visited Pune to inaugurate the Pune Metro rail project, Thackeray stayed away from the function too.

Some glimpses from today’s programme in Mumbai. pic.twitter.com/h083MfvyHt

.🔴Take a look at more developments from Maharashtra

Some people are trying to create atmosphere for imposition of President’s Rule in Maharashtra, says Walse-Patil

Maharashtra Home Minister Dilip Walse Patil on Sunday said efforts were on by some people to create an atmosphere conducive to the imposition of the President’s Rule in the state.

He also termed as “appropriate” the arrest of the Ranas in connection with their announcement to recite Hanuman Chalisa outside the residence of Chief Minister Thackeray in Mumbai. The plan by Navneet Rana and Ravi Rana had angered Shiv Sena workers, who held strident protests against them on Saturday. The Ranas were later arrested for “creating enmity between different groups”. 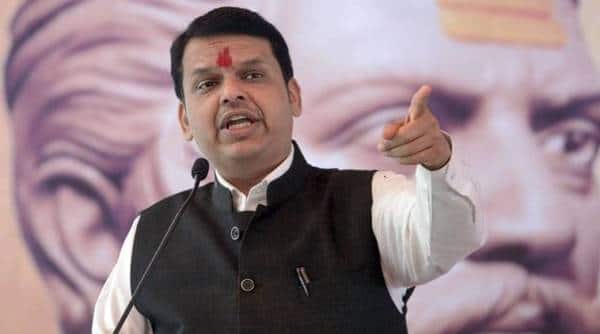 In view of strident protests by Shiv Sena workers in Mumbai against the Ranas and the “attack” on the SUV of former BJP MP Kirit Somaiya, senior BJP leader Devendra Fadnavis on Sunday said that the people of Maharashtra feel President’s Rule should be imposed in the state.

Though Fadnavis made it clear that the BJP will not demand President’s Rule in the state, his party colleague and Union minister Narayan Rane said it should be imposed as the state government has failed to maintain law and order and indulged in the “politics of revenge”.

The Mumbai police have registered an FIR against the driver of senior BJP leader Somaiya for allegedly driving in a rash and negligent manner, due to which a Shiv Sena corporator and a party worker suffered minor injuries, an official said on Sunday.

The FIR was registered late Saturday night after local Shiv Sena functionary Bhai Zhende lodged a complaint and sought action against the driver, the official from Khar police station said.

The incident took place on Saturday night when Somaiya was returning from the Khar police station after meeting Navneet Rana and Ravi Rana following their arrest.

Will take up issue of attack on Kirit Somaiya with Centre, says Fadnavis

Fadnavis on Sunday said they will complain to the Union home secretary against the Mumbai police’s “failure” to protect Kirit Somaiya, who enjoys ‘Z’ category security. On Saturday night, some Shiv Sena supporters allegedly hurled footwear and water bottles at Somaiya’s SUV when he was leaving the Khar police station in Mumbai.

Some glimpses from today’s programme in Mumbai. pic.twitter.com/h083MfvyHt

A day after the Mumbai police arrested Navneet Rana and Ravi Rana, Shiv Sena’s chief spokesperson Sanjay Raut on Sunday defended the action, saying there must have been some reason behind the police action. “What business does Somaiya have in an ongoing investigation by the Mumbai police against Ravi Rana and Navneet Rana? If the police have taken some action against them, there must be some reason,” Raut said.

Referring to the attack on Somaiya’s car near the Khar police station on Saturday, Raut told reporters that “some traitors do get pelted with stones”.

I stay away from felicitation events but made an exception: PM Modi on

Prime Minister Narendra Modi on Sunday said he generally stays away from felicitation ceremonies but made an exception to receive the first Lata Deenanath Mangeshkar award named after the legendary singer whom he considered his “elder sister”. Modi received the award at Shanmukhanand Hall in Mumbai on Sunday, which marked the 80th death anniversary of  Deenanath Mangeshkar, the singing legend’s father.

“I generally keep myself away from such felicitation ceremonies. I cannot adjust myself (in such programmes). But when an award is named after an elder sister like Lata Mangeshkar, then it becomes an obligation for me to accept it because of the affection and right of the Mangeshkar family over me,” the prime minister said in his award acceptance speech.

The state breathed ‘satisfactory’ air during most of the days in 2020-21 (52 per cent of the days), according to the annual report from the Maharashtra Pollution Control Board (MPCB).

Experts believe that the lockdown restrictions played a big role in maintaining ‘good’ and ‘satisfactory’ air quality in the state. Starting March 2020, the entire state was under a strict lockdown and there were restrictions on vehicular movements among others till the end of the year.

Maharashtra on Sunday reported 144 fresh Covid-19 cases and two fatalities, taking the tally of infections to 78,76,841 and the death toll to 1,47,834, a health official said. Both the deaths were reported from Pune city, he said. With 95 patients being discharged after Covid-19 treatment, the overall count of recoveries in Maharashtra rose to 77,28,091 as of Sunday, leaving the state with 916 active cases.