The program, which has been likened to China’s social credit system, is slated to go into effect in September, 2022, using a “smart citizen wallet” app for cell phones.

“In September, we will start with a pilot project for the city: at the center is the virtuous citizen, the one who, for example, separates waste well or does not waste energy, or uses public transport and does not receive fines, or actively uses the Bologna Welcome Card,” announced Massimo Bugani, councilor for the city’s digital agenda and civic use of data, at a press conference late last month.

“The municipality will assign such citizens a score as part of a reward system with economic benefits to individual users,” Bugani explained.

Citizens will have access to their rating, which can be improved by earning points that they may then “spend” on prizes such as rebates and cultural activities as a reward for their “virtuous behavior.”

Bugani stated that the app was part of a broader initiative by the city of Bologna to engage in digital innovation. “What we call a new ‘water system’ for the city is being built,” he said, adding that in coming years “many services will go digital in Italy; we have an ambitious project here that is built on solid foundations.”

Although Bugani has insisted that participation in the program will be voluntary, he has expressed his confidence that many will enroll. 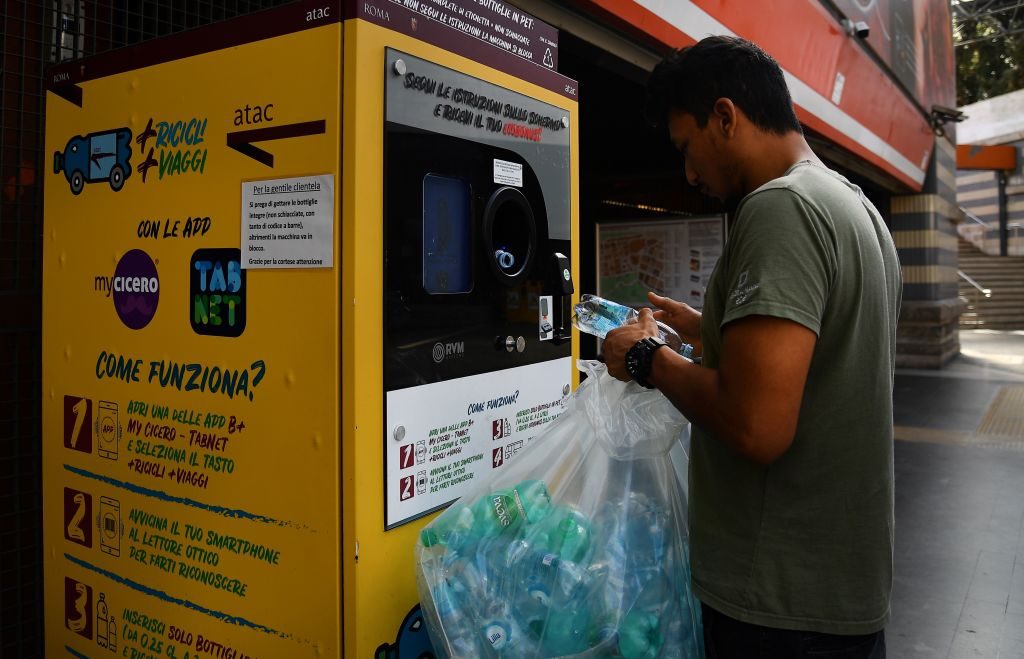 A commuter trades plastic bottles for transit credit at a reverse vending machine on October 8, 2019 at the Cipro underground metro station on the A line in Rome. Commuters in Rome can save cash and act for the environment by swapping plastic for transit credits. (TIZIANA FABI/AFP via Getty)

Critics of the program, such as the Italian tech firm Privacy Network, which specialized in digital privacy, have warned of the legal, ethical, and societal implications of such apps.

“These practices, if poorly developed or used, can lead to serious limitations on, and violations of, citizens’ rights and freedoms, as well as discriminatory practices, which are also achieved through technological means, such as ‘social credit’ systems (or social scoring),” reads a Privacy Network online statement.

Others have noted that social credit apps, “if poorly developed or used, can lead to serious limitations on, and violations of, citizens’ rights and freedoms, as well as discriminatory practices.” Nowhere have the dangers of this practice been more evident than in China, where social credit scores affect citizens’ ability to travel, education, employment, and even welfare support.

It is unsurprising that in Italy, social credit scoring is being introduced in relation to environmental friendliness, given its love affair with green politics.

As Breitbart News has reported, the Italian government has introduced rationing of air conditioning and heat in an attempt to reduce the nation’s dependence on imported Russian energy.

As of May 21, public buildings will be limited in their use of heating and cooling, with caps set on maximum and minimum temperatures and stiff fines for failing to respect them.

While the mandatory limits will initially affect only public buildings, the AC and heat rationing may be extended to private homes in the future, according to reports.

Like much of Europe, Italy has become heavily dependent on Russian oil and gas due to its unwillingness to produce its own energy and EU governments are currently providing some billion dollars a day to Moscow for its gas and oil.