GOP to Call Out Biden, Mayorkas for ‘Erasing Immigration Enforcement’

Republicans in Congress have laid out ample evidence that President Joe Biden’s administration is “erasing immigration enforcement” as they prepare to confront Department of Homeland Security (DHS) Secretary Alejandro Mayorkas at a hearing this week, according to a memo.

It was circulated among committee Republicans ahead of the Thursday hearing, which is anticipated to be a tense clash as Biden prepares to end the Title 42 border control on May 23 and as record-breaking surges of illegal migration continue. 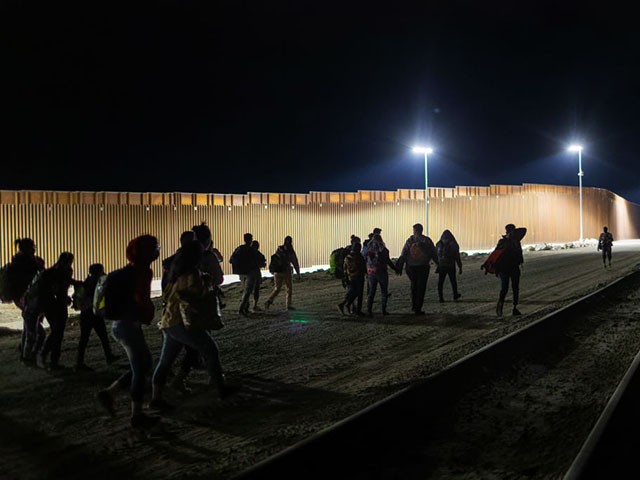 Migrants walk along the U.S. border wall after crossing from Mexico through a nearby gap in the fence on December 7, 2021, in Yuma, Arizona. (John Moore/Getty Images)

While the Times claimed the memo “shows how Republicans plan to weaponize the issue of immigration as part of their midterm campaign strategy,” in reality, the memo is void of any midterm election or campaign mentions.

The memo begins with a broad overview of Republicans’ position on the “historically bad” and ever-worsening border crisis, observing the Biden administration’s policies are “aimed at ‘managing the flow’ of illegal aliens and encouraging additional illegal immigration.”

The administration is “systematically dismantling immigration enforcement in the interior to ensure that few aliens are removed,” the memo charges.

One key indicator of Biden’s fault in the migration surge, per the memo, is that the president suspended construction of the southern border wall when he took office, leaving hundreds of miles of wide gaps for illegal border crossings and drug trafficking to occur.

Biden stood by the decision despite broad public support for completing the critical barrier. A Times op-ed published last year also called for completing the wall, admitting “a well-built wall should still be a central part of an overall immigration fix. It’s an imperfect but functional deterrent against the most reckless forms of border crossing.”

Remain in Mexico allows officials to return asylum-seekers to Mexico while they await their immigration court hearings instead of being released into American communities.

After federal court challenges, Biden was forced to resume Remain in Mexico, but the memo outlines proof that his administration has dramatically scaled back its implementation to essentially negate its purpose of discouraging illegal migration.

The Supreme Court is set to review an appeal from the Biden administration to end the program entirely in a hearing Tuesday, two days prior to Congress’s meeting with Mayorkas.

One of Biden’s alternatives to Remain in Mexico, known as catch and release, incentivizes migrants to take the dangerous and sometimes deadly journey up to the U.S.-Mexico border. There they can illegally enter the United States, claim they are seeking asylum, and then receive authorization from DHS to live and work quasi-illegally in the country while they await their court hearings, which are estimated to be backlogged by 58 months, or about five years.

The Center for Immigration Studies previewed the case awaiting Supreme Court review on Monday, noting, “The biggest issue and most stubborn fact that the Biden administration must deal with is that MPP worked. … Asylum cases were expedited under the program, and MPP removed incentives for aliens to make weak or bogus claims when apprehended.”

While Biden often frames peeling away border protections as humane and compassionate, the Republican memo notes that “most aliens lacked meritorious claims for asylum . . . [with] only 14 percent of aliens who claimed credible fear of persecution or torture [being] granted asylum between Fiscal Year 2008 and Fiscal Year 2019.”

The memo also acknowledges the Biden administration is “prioritizing aliens over American citizens.” However, it downplays any mention of the pocketbook impact of illegal migration, such as stalled American wages, rising rents, and the shift of wealth from heartland states to the coasts.

While the lengthy memo is one aspect of a slate of behind-closed-doors preparations Republicans are making ahead of the hearing, Jordan sent a letter to Mayorkas last week with public preparation requests “to ensure” the border chief’s long-awaited appearance “generates a fruitful discussion.”

Secretary Mayorkas is testifying next week. We’ve got some questions. pic.twitter.com/2N32qQMfDc