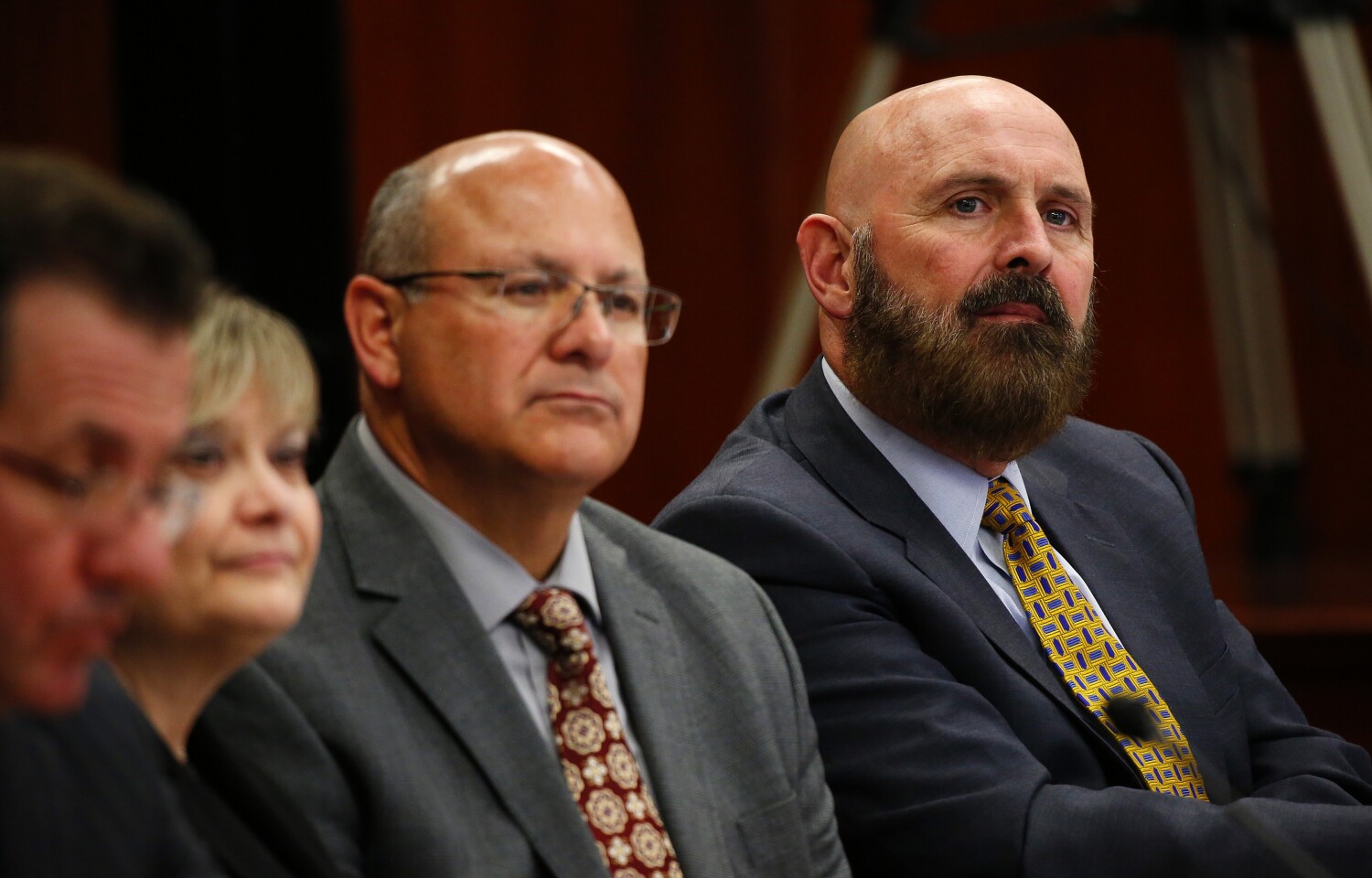 David Wright, the former top executive at the Los Angeles Department of Water and Power, will be sentenced Monday in the ongoing federal corruption case involving the DWP and the city attorney’s office.

Prosecutors have asked the court to sentence Wright to eight years in prison and to impose a fine of $100,000. Wright’s lawyers are seeking less than two years in prison, according to court documents.

Wright, who pleaded guilty to one count of bribery earlier this year, is the first city employee set to be sentenced in the corruption case. A former DWP cybersecurity chief, former top attorney who worked under City Atty. Mike Feuer, and an outside attorney hired by the city also await sentencing.

Wright admitted in January that he persuaded the DWP board in 2017 to award a $30-million no-bid contract to a company without informing the board that he secretly had agreed to accept a $1-million-per-year job and the use of a Mercedes-Benz at that company once he retired from the utility.

Wright also destroyed evidence and knowingly made false statements to FBI agents and federal prosecutors, he admitted in court documents.

The crimes have shed light on City Hall’s lack of financial and ethical oversight at the DWP, an agency that Mayor Eric Garcetti vowed to reform when he was elected as mayor in 2013.

Hired in 2016 by Garcetti for the DWP job, Wright was viewed by some at City Hall as a toe-the-line bureaucrat who would carry out the orders of the mayor’s office. However, prosecutors said in court documents that Wright took part in a scheme where his “motive was naked greed — he sought to cash in on the public trust for his own personal wealth and advancement.”

In court documents, attorneys for Wright painted the one-time utility executive as struggling with insecurity about his job, health issues and grief over his father’s death at the time of his crimes. Wright is “extraordinarily embarrassed and remorseful” about his actions, his attorneys wrote.

The federal investigation into the DWP and the city attorney’s office became publicly known in July 2019, when FBI agents raided both departments seeking information about a class-action lawsuit brought by DWP customers over faulty bills and lucrative DWP contracts.

Prosecutors say that Wright developed a close relationship with New York attorney Paul Paradis, who was working for the city attorney’s office on litigation stemming from the faulty billing system.

Wright and Paradis met in February 2017 at a hotel restaurant in Riverside and discussed Paradis’ intent to create a new company, Aventador Utility Solutions LLC, for the purpose of seeking a lucrative contract with the DWP, prosecutors said in court documents filed last year.

Wright ensured that the DWP awarded the contract without competitive bidding, prosecutors wrote. In exchange, Paradis agreed to name Wright chief executive of Aventador following Wright’s retirement from the utility, with Wright earning a salary of $1 million, according to prosecutors.

“Wright and Paradis further discussed the need to keep their agreement confidential, because they knew that it was illegal,” prosecutors wrote.

The pair also collaborated in other ways. After the two traveled to Israel in 2018, Wright and Paradis hatched a plan to bring a cyber company to L.A., the agreement says. Paradis would put up $5 million in capital and have a controlling interest, and Wright would have an ownership interest, prosecutors said.

Wright told Paradis that the DWP would purchase five years of cybersecurity training at the franchise facility for $3 million a year, prosecutors said.

By March 2019, there was growing public attention on the Aventador contract and questions about city attorneys’ actions in the billing litigation. At a meeting that month, Wright told Paradis that he “feared that their relationship and their corrupt plans for Aventador would be discovered,” prosecutors said in court documents.

Wright directed Paradis to “destroy their incriminating text messages and emails” from Wright’s cellphone and Apple iCloud, prosecutors said. The pair also met at a downtown Los Angeles cafe where Paradis left a paper bag with a “wiped phone and a burner phone” for Wright, according to prosecutors.

Wright participated in a voluntary interview with federal investigators at his residence in June 2019, one month before the FBI raid of the utility and city attorney’s office, according to court documents.

Wright “falsely stated that he did not have any financial or business interest — present or future — in Aventador, any successor or affiliate company, or any other company associated with Paradis,” prosecutors wrote.

Wright’s attorneys said that he cooperated with the government after meeting with officials and wore a wire to covertly record others.

“Based on the government’s directions, Mr. Wright recorded numerous phone calls and meetings with a large number of individuals who are thought to be persons of interest in the government’s investigation,” Wright’s attorneys wrote in court documents.

In arguing for a lower sentence, Wright’s attorneys wrote that although Wright received meals, travel and event tickets from Paradis, “he did not receive any of the proposed proceeds of his job offer from Mr. Paradis, including the offered $1 million salary, the luxury car, or the signing bonus that he and Mr. Paradis agreed upon as part of the bribery scheme.”

Wright previously worked as general manager of Riverside Public Utilities. In January, leaders in that city asked the Riverside County district attorney’s office to investigate whether utility contracts were “illegally steered” to companies when Wright worked at the utility, the Press-Enterprise reported.