China launched a series of mass coronavirus tests in Beijing on Monday, sparking panic among residents who fear a brutal Shanghai-style lockdown could be next for the capital city.

Chinese state media appears to be preparing the public for such a fate, even as Shanghai’s lockdown grinds into its fourth week with no end in sight.

The Chaoyang district of Beijing announced its 3.5 million residents will be required to undergo nucleic acid testing on Monday, Wednesday, and Friday after supposedly detecting 26 coronavirus infections over the weekend. Chinese data on coronavirus infections and deaths should always be viewed with suspicion, especially when seemingly tiny numbers of reported infections trigger waves of citywide testing and lockdowns.

“Health experts believed that Beijing has already taken effective and strong measures to prevent the situation from getting worse, and the results of the mass nucleic acid testing will be an index for the capital city to decide whether to take further anti-epidemic measures such as locking down some areas,” the state-run Global Times ominously reported on Sunday.

“As the district is set to roll out three rounds of nucleic acid testing on all residents starting Monday, some worried that certain areas may be put under lockdown and supplies might be an issue considering that residents in Shanghai experienced food shortages in the initial phase of the fight against the coronavirus,” the Chinese Communist paper wrote even more ominously on Monday.

A respiratory disease expert in Beijing told the Global Times on Monday it would soon be necessary to implement “mass testing or a lockdown” across much of the city to contain the “relatively insidious and contagious” omicron variant in accordance with China’s “dynamic zero-Covid” policy, which is not working very well against the outbreak in Shanghai.

“The city has recently seen several outbreaks involving multiple transmission chains, and the risk of continued and undetected transmission is high. The situation is urgent and grim. The whole city must act immediately,” Beijing municipal official Tian Wei said at a press conference on Saturday.

The Global Times reported “panic shopping” in Chaoyang, with some markets experiencing a “temporary shortage of fresh vegetables on Sunday afternoon,” but claimed the grocery supply was quickly stabilized by “emergency response mechanisms.” Food sellers extended their hours and brought in extra staff to handle the shopping surge.

The Global Times offered a breezy photo essay of Beijing residents “shopping for food on Sunday afternoon amid concerns over a snap lockdown.” China’s lockdowns are usually imposed with very little advance warning because the authorities fear terrified citizens will attempt to flee the targeted city.

Foreign observers noted Beijing supermarket chains and grocery e-commerce platforms appeared to be stocking up for a much larger wave of panic buying to come.

China placed all 17 million residents in one of its biggest cities under lockdown on Sunday, as virus cases doubled nationwide. https://t.co/vyFOBbatZJ

“Even in districts such as Haidian that have yet to report any cases in the current outbreak, there is a sense of growing unease over food supply,” Reuters reported on Monday.

A Global Times editorial on Monday struggled to defend lockdowns, even as the number of cases in Shanghai increased and fatalities tripled to reach an all-time high amid the longest and most brutal lockdown imposed since the initial outbreak in Wuhan at the beginning of 2020.

The Global Times made no attempt to explain why the Shanghai lockdown failed, instead burbling about allegedly successful lockdowns in other cities, and suggesting the lesson to be learned from Shanghai is that lockdowns must be imposed even more swiftly and harshly:

The Omicron variant places higher requirements on the response of “early detection, early reporting, early quarantine and early treatment.” It also tends to make some regions feel nervous, fearing that the area under their jurisdiction may be overwhelmed by an outbreak. But despite such attention and pressure, we cannot ignore the practical conditions and violate scientific rules. Some regions arbitrarily close off highways with the excuse of epidemic prevention and control, some impose “static management” even if no infections have been reported, and other places prohibit farmers from farming even if there is no COVID-19 outbreak locally. These practices are all twisting the dynamic zero-COVID policy. Attention has been paid to resolving those problems according to law. Meanwhile, we should also be vigilant to the tendency of seeking to avoid being punished by adopting radical control measures.

“We cannot equate ‘dynamic zero-COVID’ with zero infection, the measure of lockdowns and citywide nucleic acid testing,” the Global Times intoned, even though zero is right there in the name of the policy.

The editorial concluded by railing against “formalism and bureaucracy,” setting up the usual low-level Communist flunkies to take the blame for failing to properly implement brilliant policies devised by the scientist-tyrants of Beijing:

ABC News predicted rough times ahead for Beijing, since dictator Xi Jinping will find himself under considerable “political strain” from either a massive omicron outbreak in the capital, Shanghai-style suicide-inducing lockdowns, or both. 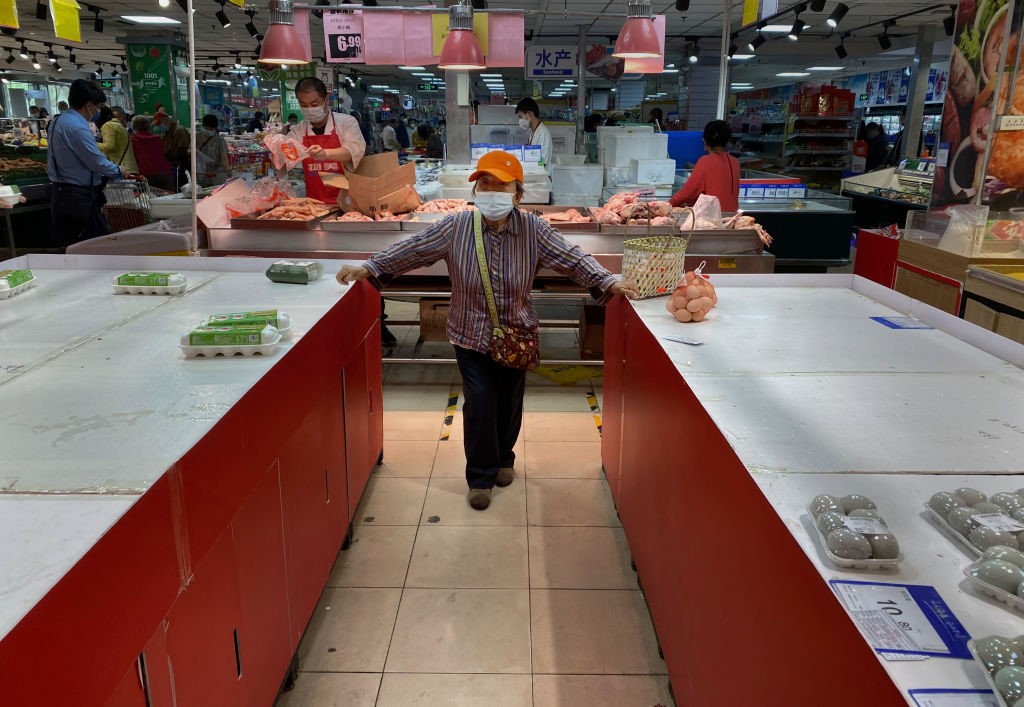 A woman stands between nearly empty displays for eggs after they were bought out at a supermarket in Chaoyang District on April 25, 2022 in Beijing, China. China is trying to contain a spike in coronavirus cases in the capital Beijing after dozens of people tested positive for the virus in recent days, causing local authorities to initiate mass testing in some areas and to lockdown some neighbourhoods where cases are found in an effort to maintain the country”  zero COVID strategy. (Kevin Frayer/Getty Images)

The horror in Shanghai stepped up to a new level over the weekend with the appearance of mysterious green metal barriers around some areas of the city. The authorities belatedly announced these barriers marked an even tougher form of “hard isolation” for districts with high case counts.

A six-minute video called “Voices of April” appeared on Chinese social media on Friday, compiling scenes of desperation and outrage from Shanghai, including clips from earlier videos that were suppressed by the Communist government. “Voices of April” itself was targeted by Chinese censors with such vigor that its terrified anonymous creator began begging WeChat users to stop sharing it.