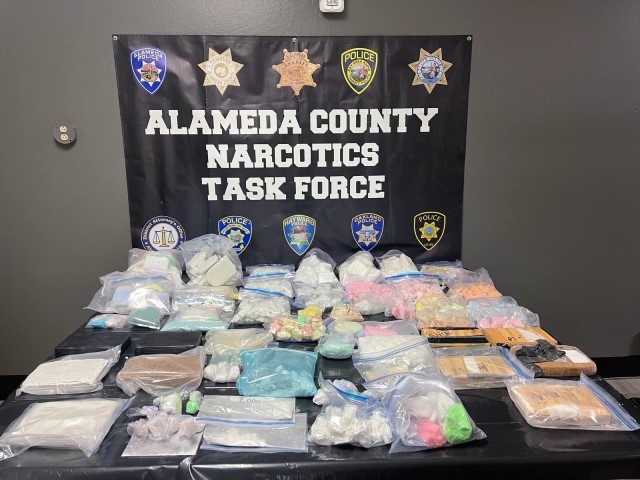 The Alameda County Narcotics Task Force conducted the biggest drug bust in the county’s history, seizing 90 pounds of fentanyl Friday that authorities said have a street value of $4.2 million, according to the Alameda County Sheriff’s Office.

The San Francisco Chronicle reported on the operation, which involved enough fentanyl to kill millions of Americans:

Detectives at the manufacturing lab found 92.58 pounds of fentanyl and two illegal firearms. One suspect involved in the manufacturing of fentanyl was taken into custody, and authorities are searching for a second suspect “on the run,” Kelly said. Neither suspects’ identities nor the exact location of the fentanyl lab were disclosed.

Bay Area public health officials say fentanyl, a synthetic opioid far more potent than heroin, has been the driver of the region’s opioid epidemic in recent years. About seven in 10 drug-related deaths in San Francisco involve fentanyl, according to figures from the city’s Office of the Chief Medical Examiner, and the illicit drug can be lethal even in small amounts.

MASSIVE FENTANYL BUST: ACSO detectives and their partners at the Narcotics Task Force recovered 92.5 pounds of illicit fentanyl at locations in Oakland and Hayward. That’s 42,000 grams that were headed for the streets of the Bay Area. This is a glimpse of the fentanyl epidemic. pic.twitter.com/LEJTU1v5uh

The sheriff’s office noted on their Facebook account that “per the dea.gov one kilogram of fentanyl can kill 500,000 people.”

“This shows you just how prolific our fentanyl problem is,” Kelly said in the article. “Every day, people in the Bay Area continue to overdose, young people suffering from addiction, and they’re dying at unacceptable rates. So this is just one dent that we feel we took.”