BP Issues Fine for Joe Biden ‘I Did That!’ Gas Pump Stickers

British oil and gas giant BP has given fresh meaning to the term “sticker shock” by reportedly fining a Wisconsin gas station for displaying an image of a grimly smiling President Joe Biden with a pointed finger captioned “I did that!” on a pump.

Customers across the country are attacking the president over soaring prices caused by Bidenflation, however BP appears to be bringing in punitive measures of its own to stop the practise.

A Wisconsin gas station owner has told Sky News Australia BP hit her with a $400 because a customer attached a sticker criticising Biden to a pump.

“We keep taking them off, not that I want to, and they keep putting them back on. We can’t have someone standing out there 24/7 but yeah it cost me $400 in our money from BP because I have those stickers on there. I don’t care. Truth hurts doesn’t it,” Coy said.

Watch the report below:

This is not the first time a penalty has been earned for an anti-Biden gas pump action.

As Breitbart News reported, earlier this month a man in Pennsylvania was threatened with charges after being accused of putting stickers blasting Biden on a gas pump during an incident caught on video.

The clip appeared to show Glazewski shouting, “I did that! I did that! That’s what I did!’ while pointing out the stickers to officers at the scene. 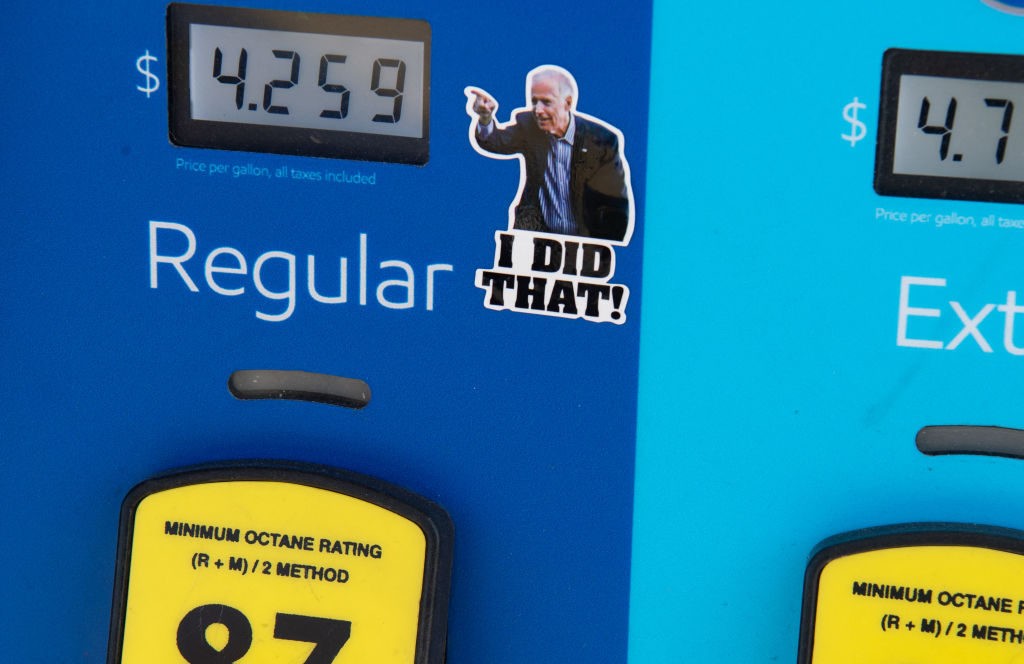 A gas pump displays current fuel prices, along with a sticker of U.S. President Joe Biden, at a gas station in Arlington, Virginia, on March 16, 2022. ( SAUL LOEB/AFP via Getty Images)

Moments later, he ran toward the gas station, but an officer pulled him to the ground and handcuffed him.

According to charging documents, a gas station worker alleged Glazewski sprayed the stickers with something, making them more difficult to peel off.

“Glazewski was reportedly upset about the price of gas and President Joe Biden,” the Fox 4 article read.

Javier Estrada Ovalles, who sells his own version of “I did that!” stickers on his website automotiveanarchyco.com, told Slate rising gas prices mean rising sticker sales.

“But in this last month alone, once the prices of the gas really started going up, I started getting bulk sales twice or three times more than it was before,” Ovalles explained, adding he once sold 20-30 individual orders daily but the number has jumped to 80 per day.

“Me personally, I’m not either left or right or Democrat or Republican, nothing like that. It’s just whatever sells is pretty much what’s gonna go on the shelf,” he told Slate.