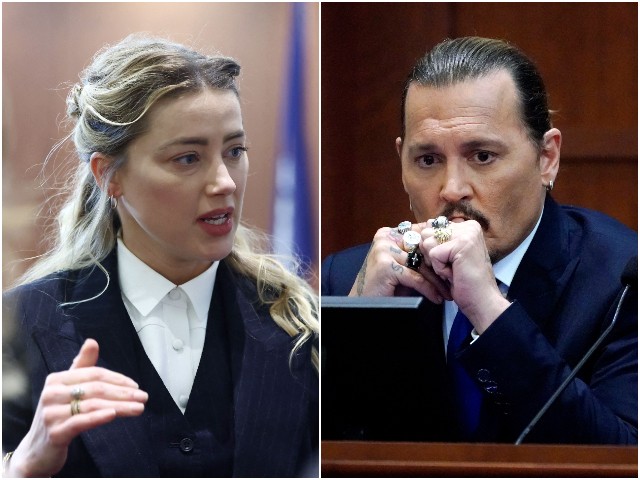 An audio recording played during the Depp-Heard defamation trial on Monday revealed Amber Heard telling Johnny Depp to “tell the world” he is a male victim of domestic violence, and see how many people “believe” him.

“See what the jury and judge thinks,” Heard, Depp’s now ex-wife, says in the audio recording. “Tell the world, Johnny, tell them, “Johnny Depp, I, a man, I’m a victim, too, of domestic violence’ — and see how many people believe or side with you.”

“See what the jury and judge thinks — tell the world, Johnny, tell them, ‘I, Johnny Depp, a man, I’m a victim, too, of domestic violence,’ and see how many people believe or side with you.” —Amber Heard pic.twitter.com/8aMCxtKpz9

At another part of the recording, Depp is heard saying, “Amber, I lost a fucking finger, man, come on. I had a fucking jar — a can of mineral spirits thrown at my nose.”

Depp’s comments in the recording were in reference to a claim the Pirates of the Caribbean star made last week during the defamation trial, in which he said Heard had thrown bottles of vodka at him during an argument, resulting in his middle finger being severed by broken glass.

Other shocking claims Depp made about Heard in the courtroom last week included the assertion that the actress or one of her friends had defecated in their bed after an argument in which he said he was leaving her.

Depp also claims Heard had shouted, “Stop hitting me, Johnny!” while he was standing 20 feet away from her.

Moreover, Heard’s attorney claimed during the trial last week that the actress carried Milani Conceal + Perfect All-in-One Correcting Kit with her throughout her “entire relationship” with Depp, suggesting that Heard used the makeup kit to hide injuries she sustained from Depp’s alleged physical abuse.

Cosmetics company Milani, however, reacted to Heard’s attorney’s comments by debunking the claim, clarifying that the makeup kit mentioned didn’t even exist during the actress’ relationship with Depp.

Depp is suing Heard for defamation, claiming that a 2018 piece she wrote in the Washington Post — in which she referred to herself as a “public figure representing domestic abuse” — has harmed his movie career.

The actor, who has denied Heard’s allegations of abuse, is seeking $50 million in the defamation suit to compensate for the damage done to his career. Heard is countersuing for $100 million.